Operant conditioning is a theory of behavior and motivation put forward by behaviorist, B.F. Skinner . The theory lays out two types of motivation for behavior which are reinforcement and punishment. The idea is that any action that is followed by a reinforcer will be strengthened, while any action that is followed by a punishment will be reduced. This theory deals mainly with extrinsic motivators. We discuss this in more detail in section 4. 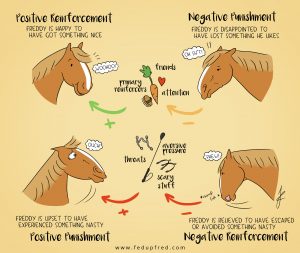 Negative reinforcements in the workplace are the removal of an unpleasant stimulus. These are less common in the workplace as usually, the company will strive to make working conditions as comfortable as possible. However, these might include:

Positive punishments are when something unpleasant happens as a result of the behavior. These are perhaps the least common in the workplace, but might include: 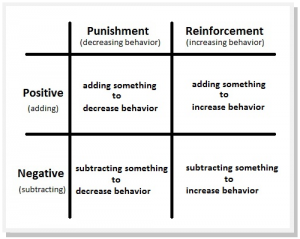 Negative punishments in the workplace are when something of value is taken away, such as:

These different kinds of reinforcements and punishments can be used to motivate people in the workplace. When used together and in balance, they can be effective at keeping employees on track and motivated to perform well.

Check out this great video (3 min) which uses the example of students and teachers to demonstrate the different elements of operant conditioning.