Your Brain: A Quick Overview (4 min)

Your Brain: A Quick Overview

Your brain isn’t your body’s largest organ or the easiest to access, but it is extremely important for your day-to-day function. Sitting just behind your eyes, the human brain weighs about 3 lbs. and takes up around 1.25 liters of space. That means that most brains would fit in a 2-liter soda bottle and leave a lot of empty space. While on average it accounts for only about 3% of your body’s weight, it uses 20% of your body’s energy resources, which means that how you feed and take care of your body will also have a tremendous impact on your brain. 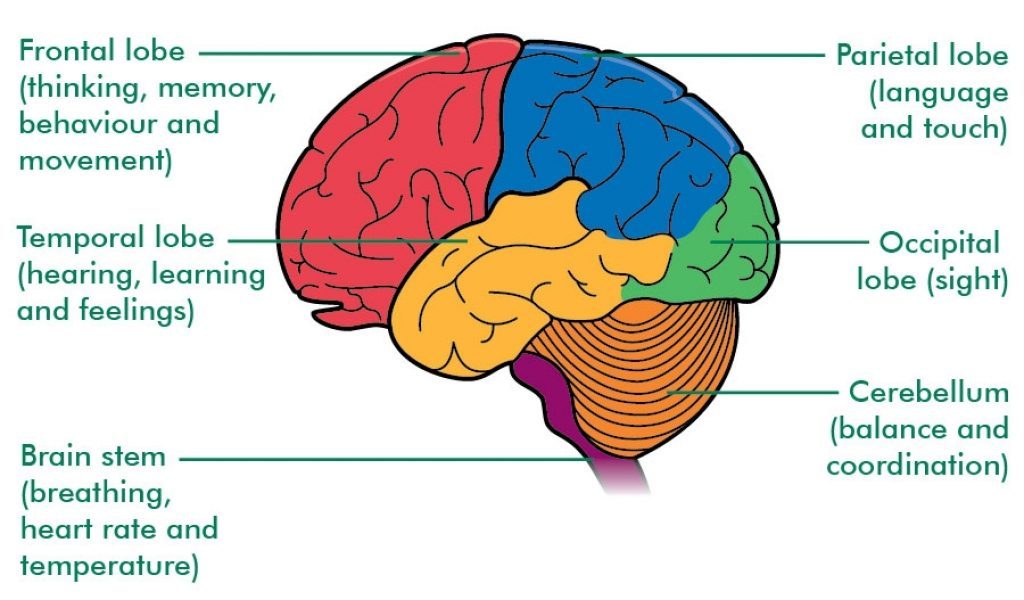 When people see pictures of the brain, the first thing they notice is usually the cerebrum. This is the wrinkly, outer surface of the brain. It is a thin layer where neurons are found and it is the source of most of your thinking activities. You may have also heard the cerebrum referred to as “gray matter.” This matter is divided into four main sections or “lobes” by brain scientists: the frontal, parietal, temporal and occipital lobes.

The cerebrum is also divided into two halves (called hemispheres) by a deep fissure but the two brain hemispheres talk to each other through a bundle of nerves called the corpus callosum. It is difficult to visualize this area because the hemispheres sit directly next to one another!

The brain is, for the most part, symmetric in each hemisphere. You may have heard of the terms “left-brain” and “right-brain.” While different parts of your brain regulate or work with different parts of your body, you don’t actually use a few parts of your brain — you use all of it. In fact, the old story that humans use only 10% of their brain capacity has been shown to be completely false by MRI scans. Additionally, it seems likely that the left-brain/right-brain myth comes from the fact that a few brain functions are localized on one side of the brain. The best and primary example of this is the areas of the brain that process human language is on the left side of the brain.

Watch this short video to dispel some other common myths about the brain: